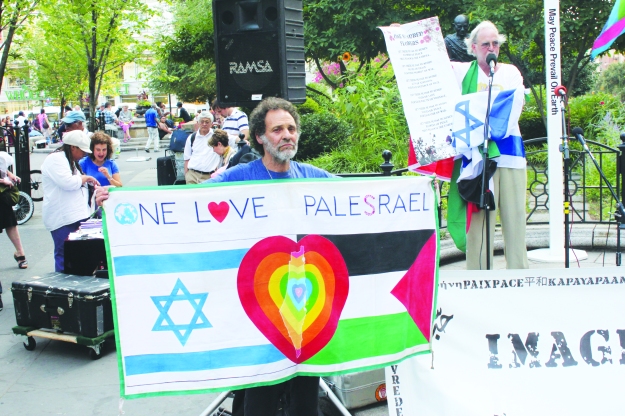 A demonstrator displays a flag at a gathering for Universal Peace Day, which commemorates the bombing of Hiroshima and Nagasaki, on Aug. 5.

By Angela Kim, Amna Nawaz, Nicholas Santiago and Hasani Valdez
with the staff of the Princeton Summer Journal

New Yorkers are known for their global-mindedness, diversity and strong opinions. But in a survey conducted by the Princeton Summer Journalism Program last week in New York, a majority of respondents did not know some of the basic facts of the Israeli-Palestinian conflict in Gaza.

A large majority of 410 people interviewed around Union Square on Aug. 5 did not know the name of the leader of Hamas, the political faction which governs Gaza and is regarded as a terrorist group by the United States. Although 58-year-old Khaled Meshaal has run Hamas for the past ten years, 99 percent of those surveyed could not name him. Just three percent of those interviewed were aware that the Hamas leader resides in exile in Qatar.

Of those interviewed, just under 25 percent correctly identified the approximate number of Israeli casualties, which numbered 67 as of Aug. 6, according to BBC world news. (Responses within the range of 47-87 were considered correct answers.) Similarly, just under 25 percent of those polled correctly identified the number of Palestinian casualties within a range of 1300-2300. The number was 1,888 on Aug. 4, according to the Palestinian Center for Human Rights.

More respondents were familiar with the U.S. official most directly involved in peace talks. Fifty-two percent correctly identified Secretary of State John Kerry as the American official representing the United States in negotiations between the two sides.

Seventy-six percent of respondents didn’t know how much aid the U.S. provides annually to Israel. The Obama administration gives Israel $3 billion each year whereas the Bush administration provided roughly $2 billion in aid annually. (Responses in the range of $1-$5 billion were considered correct.)

About a quarter of respondents knew the name of Israel’s missile defense system — the Iron Dome — which the country says is effective in protecting against rocket attacks. A few days before the survey, Congress passed a bill approving $225 million in additional funding for the Iron Dome.

Many respondents were surprised to realize how little they knew. “I didn’t think the leader of Hamas had a name,” said Vito Davis. “I read the Wall Street Journal every week and I have never seen the leader’s name.”

One reason for confusion over the facts of the conflict may be because they are fluid and hotly debated. Online, partisans for both sides are expressing their version of the conflict through social media. Frustration over mainstream media has pushed many people to share propaganda and misinformation through Facebook and Twitter.

“Social media and friends provide me with the information concerning what’s going on in Gaza,” said Khader, an 18-year-old male living in New York. “I’m Muslim and although I’m sure there’s enough information to go around, people are ignorant.” Some like Rachel Sener, 22, specifically remain uninformed because of the amount of misinformation. “I don’t follow it because there’s too much propaganda,” she said.

It’s also possible that people lack knowledge about the Gaza crisis because the war feels extremely repetitive. “I think there has been plenty of blood spilled on both sides,” said John Davis. “It’s a mindless game. I don’t think anyone is going to win.”

“I’m 60 years old and this has been going on my entire adult life,” he said.

Operation Protective Edge began on July 8 after three Israeli teenagers, Naftali Frenkel, Eyal Yifrach and Gilad Shaar, were kidnapped and murdered in the West Bank. The Israeli government blamed Hamas. In response, an Israeli mob abducted and burned 16-year-old Mohammed Abu Khdeir on July 2. Tensions further escalated after the slain Palestinian’s American cousin was shown being beaten by Israeli soldiers in East Jerusalem on July 3. Hamas increased its rocket launches, and a few days later, Israel announced an offensive against targets in Gaza.

Benny Zabele, a 69-year-old peace activist, was at Union Square on Aug. 5 to commemorate the 69th anniversary of the dropping of the atomic bombs in Hiroshima and Nagasaki. During the ceremony, Zabele donned a hand-sewn flag that combined the flags of Israel and Palestine; across the middle were the words “I LOVE PALESRAEL.”

“Real peace needs to be for the people and it doesn’t make sense [to be] bombing each other,” Zabele said.