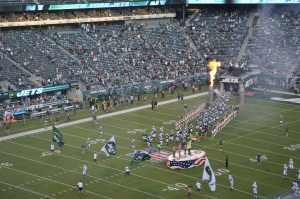 The Jets enter MetLife Stadium for their preseason opener against the Colts on Aug. 7.

The New York Jets kicked off their 2014 preseason with a 13-10 victory over the Indianapolis Colts, featuring a touchdown by running back Chris Johnson and a game-winning field goal by Andrew Furney.

The game started out with high optimism for the Colts. Last year quarterback Andrew Luck led the Colts to an 11-5 record before falling to the New England Patriots in the AFC divisional playoffs. Given the Jets’ record of 8-8 last year, the Colts were expected to dispatch with them swiftly.

But the Colts’ offense was weak, as they appeared to struggle with poor rapport and communication between rookie and experienced players.

A botched snap in the first quarter was one indication of this dynamic. On third down and goal, from the Jets’ 6 yard line, center Khaled Holmes snapped the ball to Andrew Luck, who was looking away. As the ball sailed by him, Luck scrambled backwards to retrieve it, losing 16 yards and forcing the Colts to settle for a field goal.

The team’s early struggles showed on the scoreboard, with Colts kicker Adam Vinatieri getting the team its only points of the quarter, with a 39-yard field goal.

The Jets struggled at the beginning of the game too.

“The first half wasn’t great from a defensive standpoint, but the second half was much better,” said coach Rex Ryan in the postgame press conference.

The Jets were redeemed when Nick Folk made a 51-yard field goal in the first quarter with 2:14 left.

Geno Smith, the second-year Jets quarterback, made a competent appearance in the first quarter, but it was nothing compared to veteran Michael Vick. Vick played in the second quarter, extending a drive with a fierce, clever 15-yard scramble.

Later in the drive, the Jets tied the game when Chris Johnson impressed everyone with his rushing touchdown, and Nick Folk hammered home the extra point.

After the two minute warning, the Jets tried to score before the half. But the Colts deflected Michael Vick’s pass and neutralized the threat.

Following halftime, both teams played poorly, making for a slow third quarter. Both sent in rookies, and neither team made a touchdown or field goal.

In the fourth quarter, the game finally got interesting again. Backup kicker Andrew Furney broke the tie with a remarkable 51-yard field goal with only 3:11 to spare.

When the Colts got the ball back, they quickly squandered their final chance, fumbling the ball near their own goal line, costing them the game.

While the game was mostly practice, it may have had broader implications in the Jets’ quarterback competition. Vick reminded fans that he’s still got it. If he continues to perform well in the next three preseason games, Rex Ryan might have to consider giving him Smith’s starting spot.