Throughout history, numbers have mystified and haunted humans. For example, Christians have revered the number seven as the “holy number,” and the number 666, associated with Satanism, is known as the “mark of the beast.” Today, however, humans strive toward the numbers 2400, 800, and 36. 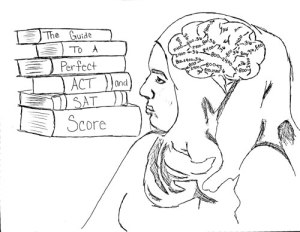 Whether students are striving for perfect scores on the SAT or the ACT, the obsession with standardized tests has held American higher education captive for nearly a century. Ultimately, this obsession stifles productivity and intellectual growth.

The SAT was first administered in 1926; the ACT followed several decades later, in 1959. Maybe 50 years ago, when American culture was more homogenous — when we all watched the same three channels and subscribed to the same few magazines — standardized tests were a smart way of determining college acceptances. But today, in an increasingly diverse and fast-paced culture, these decades-old tests are less effective at measuring a student’s capabilities. They instill in people a dogmatic mentality that high test scores equate to high success. With a greater emphasis on creative thinking and problem-solving skills — think Silicon Valley vs. General Motors — today’s society has a set of values that differ from the rote memorization of the past.

No surprise, then, that an increasing number of colleges and universities are realizing the absurdity of these tests. The most recent school to make the tests optional was The George Washington University, which joined a growing list of elite colleges, including Smith, Bowdoin, and Wesleyan, that no longer require students to submit the SAT or ACT.

In the American education system today, schools ultimately engrave into students’ minds the idea that test scores determine future success. With this type of test-taking mentality, how can we as a nation expect students to really develop their intellectual interests and compete on the global market while they are spending months on end preparing for exams? While American students are spending hours a day studying away in their rooms, students in countries such as Finland are using this time to actually pursue their interests.

It’s not just about intellectual development. There are financial considerations to take into account, too.

While some students can afford paying thousands of dollars to go to a tutor to boost their SAT and ACT scores, students coming from lower-income backgrounds are unable to afford such classes.

Finally, America is perhaps the least well-suited country for standardized tests, considering its diversity and stratification. Some might argue that standardized tests are the only way to fairly evaluate the ability of students in a nation as diverse as America. In a nation with nearly 20,000 municipalities, school districts vary greatly in funding and curriculum. For these reasons, college admissions tests fail to act as a great equalizer. Supporters of the tests argue that students can access free resources at local libraries. Although some areas may have a plethora of free resources at libraries and schools, other areas may be underfunded and under-resourced.

This obsession with standardized tests has left America eating the dust of more advanced nations throughout the world. In the most recent Program for International Student Assessment [PISA], an examination comparing the strength of students throughout the world in math, reading, and science released in 2012, Finland placed third. America, however, placed 21 out of 34 other nations.

One of the major differences between the two nations is that America overemphasizes that value of standardized tests such as the SAT and ACT, while Finland only has a single required examination at the end of high school. The Finnish system encourages students to focus on learning for learning’s sake, and teaches them that a single number or test score does not determine the value of life.

Here’s my modest proposal, then. Rather than focusing on a test-taking culture, the American education system should take a more holistic approach in educating students. Whether that is through more open discussions in classes or assigning research and writing based assignments, we should leave students the option to explore their interests rather than imposing on them a common ideology.

If America is to progress as a global leader, it has to start with its greatest investment: students.