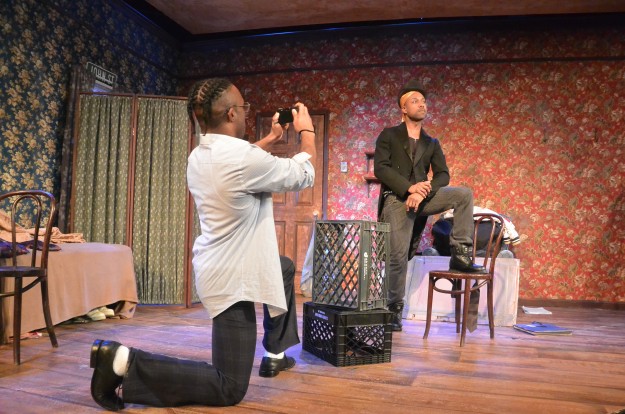 Suzan-Lori Parks’ 2001 play, “Topdog/Underdog,” explores the story of two African American brothers in continuous competition with each other, and how tragedy can arise from a shared dark past. Most notably, the play won the Pulitzer Prize for Drama in 2002, making Parks the first African American woman to achieve this honor.

In this particular stage adaptation directed by Lori Elizabeth Parquet and presented at Princeton’s Hamilton Murray Theater, Travis Raeburn plays Booth, the younger brother who tries to con people through deceptive card games, though it doesn’t come naturally to him. He houses his older brother, Lincoln, played by Nathaniel J. Ryan, who scams unsuspecting people with an ease Booth could only dream of. But Lincoln has since turned away from his hustler ways, and is now content with his low-paying Abraham Lincoln cosplay gig at the local arcade.

Viewers quickly pick up that the brothers have their problems. Booth rents an apartment in New York City, but sometimes can’t afford to pay the cable, phone, or electricity bills because he isn’t that great of a con man. His ex-girlfriend leaves him because he has no steady source of income, and his loneliness hardens into resentment.

Lincoln wants nothing more to do with the card games that so consumes his brother. He hates reflecting on his time as a con man, and gets angry when Booth brings it up. He screams at Booth, driving up tension and further dividing the two brothers.

The production consists of only two characters, but actors Ryan and Raeburn did them justice. They were exciting and emotional in their delivery, which created a very reactive crowd that laughed at every joke and gasped at every surprise. There was something about the unintentional humor that made the production very fascinating.

It’s supposed to be a serious moment, laden with underlying sibling rivalry, when Lincoln and Booth argue over money and begin to tear down the apartment in their ferocity. Yet the crowd, including myself, was dying of laughter.

A lot is foreshadowed in this play, and mentioning it would ruin the experience for viewers. However, this production provides a story like no other: how ceaseless emotional abuse can quickly turn brotherly love into malice. How, without structural support, those struggling can fall through the cracks. While these brothers, Lincoln and Booth—the topdog and underdog—care deeply for each other, it might not be enough to save them from each other, or the cards they’ve been dealt in life.