A rising senior at Absegami High School and president of her school’s drama club and Gay Straight Alliance, Sunrose planned a local protest that took place on June 26. The protest was held in Galloway’s neighboring town, Absecon, New Jersey, where she was joined by around 50 people from the community.

When asked why she decided to start her own protest, Sunrose explained that there was a protest in her hometown, Galloway, but many people who lived in nearby towns were upset that there wasn’t a protest where they resided—and weren’t stepping up to host their own. That inspired Sunrose to spend weeks planning a location, speeches, and safety pre- cautions for citizens in Absecon to have their voices heard and be properly represented in their community.

Sunrose also spent a lot of time deciding on a name for her protest, but ultimately settled on “All Black Lives Matter” in order to be inclusive of all Black lives, including those in the LGBTQ+ community.

The protesters marched, spoke, listened to speeches, knelt in a moment of silence for George Floyd, and sang in Absecon’s Heritage Park, all in an effort to honor Black people who have en- countered police brutality and to advocate for change.

Eventually, the group departed from quaint Heritage Park and marched to busy and bustling Route 30, taking their posters and voices with them for all to see and hear.

Sunrose hopes that the protests that have been occurring in Atlantic County, including her own, will provoke change in the community. 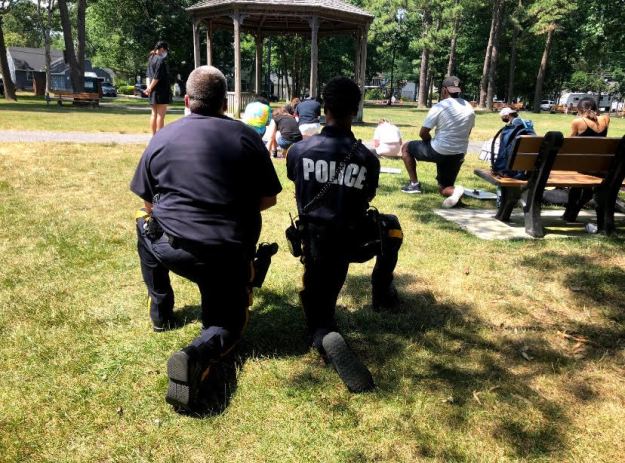 The man was unconscious. He’d been beaten and robbed. Nick Sutter, then a young detective in Princeton, feared he’d never catch the person who did it. That wasn’t because the attacker’s identity was unknown — the victim’s family knew exactly who was responsible. But they were undocumented immigrants from Guatemala and terrified that, if they talked to police, they’d be deported.

Sutter is now Princeton’s chief of police. That case, in particular, helped shape how he wants his officers to police immigrant and minority communities: by gaining their trust instead of instilling fear.

In many crimes, Sutter recently told The Princeton Summer Journal, victims are targeted “specifically because of their immigration status and their perceived hesitation to cooperate with law enforcement.” He added, “we’ve been trying to overcome that stigma with our community for a long time.”

Several recent incidents have made Sutter’s job harder. In 2016, Imani Perry, a Princeton African-American studies professor, was pulled over for speeding and then arrested on a warrant for unpaid parking violations. Perry’s account of being searched by a white male officer and handcuffed to a table at the police station made national headlines. Then, earlier this year, amid a national debate over officer-involved shootings, a mentally-troubled veteran named Scott L. Mielentz charged into a Panera Bread near the university with a bb gun. After an hours-long standoff, state troopers fatally shot him. “When a life is taken it’s not something that you get over quickly,” Sutter said.

Sutter lamented the mistrust between some residents and law enforcement—he said he became an officer to protect those who can’t protect themselves and shared several ideas for how to fix this. First, expand the department’s inventory of less-lethal weapons such as bean bags, tasers, batons, and pepper spray to better help officers disarm unstable people.

Sutter also wants his officers to wear body cameras to show the public that they’re trustworthy. He also plans to continue to diversify the department.

After all, he only solved the case of the man beaten into coma because someone from the Guatemalan community convinced the family to talk.

Princeton Police Chief Nick Sutter understands why immigrant families might be fearful of the police. Sutter, a department veteran of 24 years, has always been aware of the possible disconnect between the police department and immigrant communities.

According to Sutter, immigrants are oftentimes wary of interacting with police because they fear deportation. Yet, Sutter is concerned how misconceptions of law enforcement can discourage and deter immigrants in the community from calling for help when in need.

Sutter recalls a situation in his career when an undocumented, Hispanic man was sent to the hospital after a gruesome beating left him horribly injured to the point of comatose.

Sutter tried to question the victim’s family to find possible leads. He was certain that the family knew who the culprit was, but the undocumented relatives resisted interacting with the police. Because Sutter understood why the family was fearful around investigators, he made the conscious decision to stop approaching the family and find alternative witnesses.

Despite the additional time and energy, Sutter was eventually able to find the culprit.

On a recent afternoon, Sutter walked into a Princeton classroom wearing a light blue suit and a gentle smile. Using a calm yet confident tone, he introduced himself as the Police Chief of Princeton, then sat down, maintaining his dominant stature. “If [an immigrant’s] child is sick,” Sutter said, “We don’t want them not to dial 9-1-1 because they are scared that we’re going to ask about their immigration status.”

Sutter is determined the change the perception that police might ask about immigration status not only for immigrants but for the wider Princeton community. Sutter has implemented procedures that are similar to sanctuary cities with policies that limit cooperation with the federal government in enforcing immigration law.

In Princeton, immigrants won’t be asked their citizenship status unless they’re arrested for a crime such as driving under the influence.

Sutter has also pushed for “community policing events,” where law enforcement can socialize with immigrants. Every squad on the force is required to participate in an event such as a car wash or barbeque to get to know the wider Princeton community.

Misconceptions aren’t only an issue for police officers and immigrants, but also a problem for doctors and politicians and professionals in other fields. Sutter knows that such perceptions are harmful and false and has made it his mission to change them.

Because of the violent, often fatal, acts police have committed toward people of color—such as the killings of Philando Castile, Alton Sterling, Eric Garner and Michael Brown—some Americans currently have a negative perception of police. But recent interviews with people in the John Street neighborhood—a historically low-income neighborhood of Princeton—suggest that this is not the case here.

“I think they treat us better” because now “they even greet [us],” said 40-year-old Juan Orellana. Similarly, 35-year-old Consuelo Retanalo said that police help a lot and “do a good job.” According to local resident Joanne Rice Parker, “I respect the police…They look out for us.” Many of the sources, such as 44-year-old Oliverio Sanchez, had never had an interaction with police, but made sure to clarify that “not all” police officers are racist and sometimes need to use force on those that resist them. “To tell you the truth, they’re awesome…They don’t bother me,” said Winston McFarlane. END_OF_DOCUMENT_TOKEN_TO_BE_REPLACED

In Princeton, N.J., the conversation on police brutality falls along the same racial divides as the national one: White residents have more positive views of police, while for the most part, black residents say they have been unfairly targeted.

The uptick of attention to police brutality around the country concerns Princeton residents. In recent interviews, some said they’ve never had a run-in with police, while others claimed that cops are surveilling neighborhoods with more diverse populations. END_OF_DOCUMENT_TOKEN_TO_BE_REPLACED