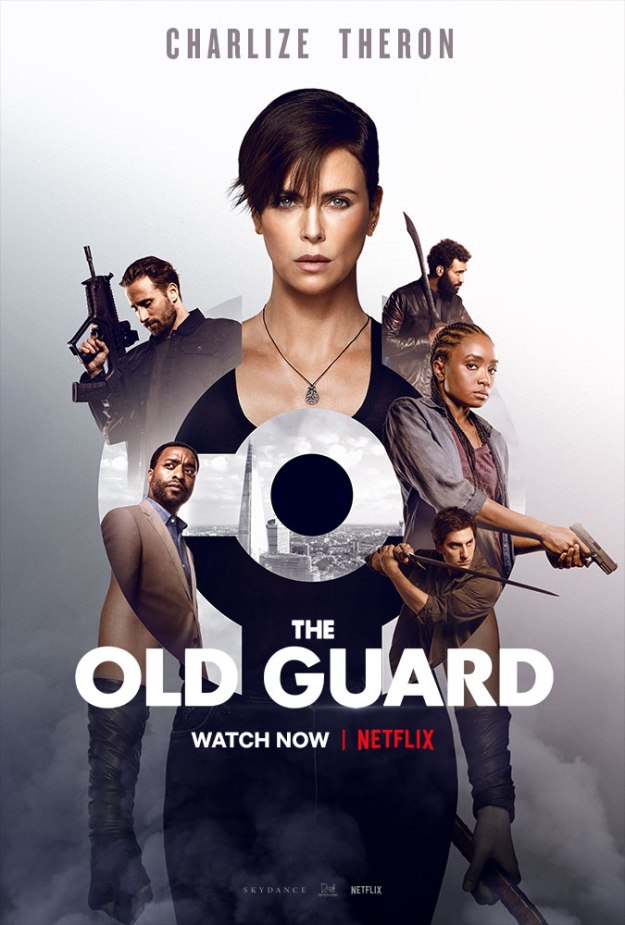 The Old Guard” follows a strong female lead, Andy (Charlize Theron), an immortal trying to change the world she’s lived in for eternity. Andy stands at the head of a group of immortal warriors—Booker (Matthias Schoenaerts), Joe (Marwan Kenzari), and Nicky (Luca Marinelli)—that she discovered and trained over centuries.

One night, the immortals have a collective dream of a female Marine, Nile (KiKi Layne), a soldier who was killed in Afghanistan but mysteriously comes back to life. Andy seeks out the Marine to join her immortal warrior team—but Nile resists, confused about what is happening to her. Having lost her father a few years prior, she’s hesitant to leave her family.

Andy and her immortal warrior team are betrayed by an ex-CIA agent, Copley (Chiwetel Ejiofor), who traps them in an evil scientific research lab. The lab captures Nicky and Joe to perform tests on them for medical research. Along the way, a betrayal and plenty of action ensue.

The movie was enjoyable because it didn’t take long for the plot to pick up. The love story between Nicky and Joe was beautiful. Seeing that they had been by each other’s sides for hundreds of years softened the movie’s hard edges.

In many action movies, the theatrical fighting and explosives can be too raw, or even boring. But “The Old Guard” was able to tie in elements of love and action to make the characters seem more human, despite their immortality. Similarly, Andy’s backstory with Quynh—an immortal whose fate is revealed through a series of flashbacks—made me love the movie so much more. The strength of them together in battle scenes fighting side by side was magical.

The only downside to this movie was the predictability of some of the plotlines. The big betrayal of the film is similar to many others, such as “Big Hero 6,” “The Matrix,” and “Star Wars Episode III: Revenge of the Sith.” But overall, “The Old Guard” has to be one of my favorite action movies. I typically don’t care to watch action movies but this one kept me engaged the whole time.

Have you ever heard of anime?” asked a student at the front of the class. My teacher looked at the kid, confused. “It’s like those weird cartoons from Japan or something,” the student added. “Don’t watch them. They’re really gross and weird.”

The students, and even the teacher himself, laughed. I sat in the back of the class beside my friend, a fellow fan of anime. We slowly turned to look at each other, puzzled. The last anime I’d watched was about a middle school boy rediscovering his love for piano. What’s so gross about that?

Cartoons are a staple of most childhoods. No one bats an eye when asked about their favorite Disney film. Why is it any different when the content originates in a foreign country? The watered-down reasoning is that it’s simply racism. But the bigger culprit is social conditioning that teaches us to think of something outside of the norm as “weird.”

What people don’t know is that they’ve probably already consumed western content inspired by anime. Ever watch “Avatar: The Last Airbender”? “Powerpuff Girls”? “Teen Titans”? All of these childhood favorites took notes from anime: exaggerated facial expressions, big eyes and mouths, and a color- ful palette for character designs. We’ve been enjoying cartoons based on anime all along.

Whenever I’ve asked someone why they don’t like anime, the answer is short: “It’s weird” or “I just don’t get it.” I have even heard people say that anime all seem per- verted. I don’t necessarily believe that the average person who says these things is outright racist, but continued anti-Asian stigma and a lack of edu- cation contribute to this pointless opposition. If all someone hears about anime is that it’s strange and distasteful, a cycle of indoctrination has been created where no one questions or denies this out of fear of being viewed as weird as well.

In the scheme of things, the only noticeable difference between the cartoons we know and love and anime is the place of origin. Anime is not just one genre or one style. Just like cartoons, there is one out there for everyone.

If we want to end the stereotypes around Asian culture, change starts with the individual. Go on Netflix, find an anime with a plot that piques your interest, and start watching it. Suggest it to friends. Normalizing content that is viewed as abnormal will only create more open-minded people and more shows and movies to enjoy.

In his work, Spike Lee, an African American filmmaker, tries to straddle the line between accurately portraying the black experience and making those experiences palatable for a larger audience. His most recent film, ‘BlacKkKlansman,’ skillfully does both, hitting the viewer over the head with symbolism and real-world allusion to blackness while also appealing to a demographically diverse group of people.

‘BlacKkKlansman’ has an interesting and unique premise: A black detective in 1970s Colorado goes undercover with the help of his white partner to expose potential dangers in a local chapter of the Ku Klux Klan. John David Washington, the actor who portrays Ron Stallworth, also known as the Black Klansman, calls his local chapter of the Klan and uses his “white voice” to pretend to be a racist white man in order to set up an undercover investigation to expose the wrongdoings of the organization. While the film expertly grapples with ideas of black assimilation in a white America, it is also littered with problematic black stereotypes.

The most prominent issue of ‘BlacKkKlansman’ is the reinforcement of stereotypes that contribute to the exploitation of African Americans in film. The idea that certain races speak in particular dialects and that “white” dialects are the most acceptable permeates throughout the entire film. One could argue that Stallworth pretending to be white over the phone is crucial for him to have gotten his foot in the door with the KKK. But by the ending, when he reveals his “black voice,” it’s clear that his eloquence and diction are supposed to be seen as an act—a white act.

Furthermore, Patrice, a black female activist and president of the Black Student Union at a local college, is an exceptionally flat and static character. Her only role is to stand for “black power” and oppose the police force, perpetuating yet another stereotype: that black people hate all cops. Lee’s exploitation of these assumptions is harmful to black people who see their race being reduced to overly-defined clichés, and simultaneously beneficial to white people who can feel comfortable hanging on to potentially problematic views they may have on the black race.

‘BlacKkKlansman’ does make the effort to depict Stallworth as a sort of mediator between two polarized sides. While that’s much needed in our current political climate, the effort could have been stronger. And the underlying issues hold this film back from realizing the type of true-to-life nuance that other movies that deal with the black identity in America — like Get Out — achieve.

Although Lee is an African American who can be said to be “of the culture,” he does not have a free pass to exploit the black characters whose stories he chooses to represent. The film is great for patronizing white liberals who want to champion the defeat of horrible racists at the hands of people of color. But if black audiences expect to see the trials and dynamics of being an African American cop undercover as a Klansman, they will be sorely disappointed.